Just the Stats: An Overview Women in the Workplace in 2014

The glass ceiling, a gender gap, war on women.

This is just some of the terminology we’ve been hearing as of late, pertaining to the role of women in today’s world, and in particular within the workplace. 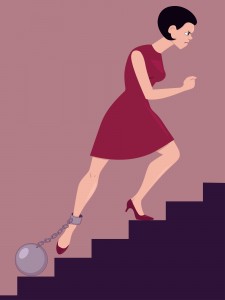 The challenges are real for women in the workplace

In recent years, the common belief was that women were on equal footing with men in the workplace, and there was little if any inequality to be seen.

While tremendous strides have been made, and women make up an increasingly significant part of the workforce, we’re also seeing some things that indicate progress may not be happening as quickly as it should be, or many would like it to be. For example, despite the fact that women make up such a large portion of the workforce, they’re not as significantly represented in leadership roles.

Additionally, many companies are finding it challenging to hold on to their top female talent, particularly when it comes to in-demand industries like technology and engineering.

Before companies can start addressing how and why they should be working on attracting and fostering female employees, it’s important to look at the numbers to see the reality of how employers see females in the workplace, versus how women see their own position.

To begin, we’re focusing on providing an overview of those numbers. Then, you can continue reading on to our other blogs focusing on females in today’s workplace, providing some tips to help employers leverage female talent, as well as tips on developing workplace sponsorship programs.

The University of North Carolina Studies the Perception Gap

A couple of years ago, a team from the UNC-Chapel Hill Kenan-Flagler School of Business conducted research on the topic of women in the workplace.

The study, entitled “Women in Business,” found some interesting gaps between how executives, particularly males, saw female employees and their roles in the business world, and the view females have.

Survey from Pew Research released at the end of 2013 showed some interesting and somewhat mixed results in terms of what it is to be a woman in today’s workplace.

First of all, women between the ages of 25 and 32 years old have a higher education level than their male counterparts. They’re also making more money, relative to men, when compared to the generations of women before them.

Despite great strides made by women, they still don’t tend to have an incredibly optimistic or favorable view of their role in the workplace.

Pew Research found 60 percent of Millennial-aged women said they believed men are paid more for doing the same work, and 58 percent of these female respondents also said they believe it’s easier for men to get high-ranking and leadership positions in business and government.

Where Are the Female Leaders?

The COO of Facebook gave a Ted Talk on the topic, entitled “Why We Have Too Few Women Leaders.”

She pointed out some startling numbers—for example, the world has 190 heads of state, and of those, only 9 are women.

Only 15 percent of top corporate positions are filled by women, and even in the non-profit sector often thought to be dominated by females, that number rises only to 20 percent.

Exodus From the Workforce

In addition to these numbers, which reflect the difficulty women feel they may have getting ahead despite factors like a higher education level, there’s another trend that’s also taking hold.

As mentioned at the start of this article, women are leaving the workforce. It’s hitting industries like engineering particularly hard, where it’s already difficult to attract top female talent, but it’s an effect that’s really being felt across the board.

All of these numbers can be disturbing, particularly in the face of what we consistently hear about the huge steps being made by women in the workplace.

The question then becomes, what can employers do to retain and foster their female talent, in order to remain competitive in today’s modern environment?

What Makes a Genius and How Can You Hire Them?

Is Your Company a Deliberately Developmental Organization?

Striking a Pose: Is There Anything to it?