Is It Really Worth It To Pay Employees to Quit?

Zappos first gained attention a few years ago for what sounded like quite the strange policy—essentially paying employees to quit.

Zappos is an online retailer of clothes and shoes, and it’s grown into what many would call a mega-brand. They are not only well-respected among consumers, but also among employees. Zappos is known for its positive workplace environment and culture, and they even have a blog dedicated to highlighting and outlining that culture. 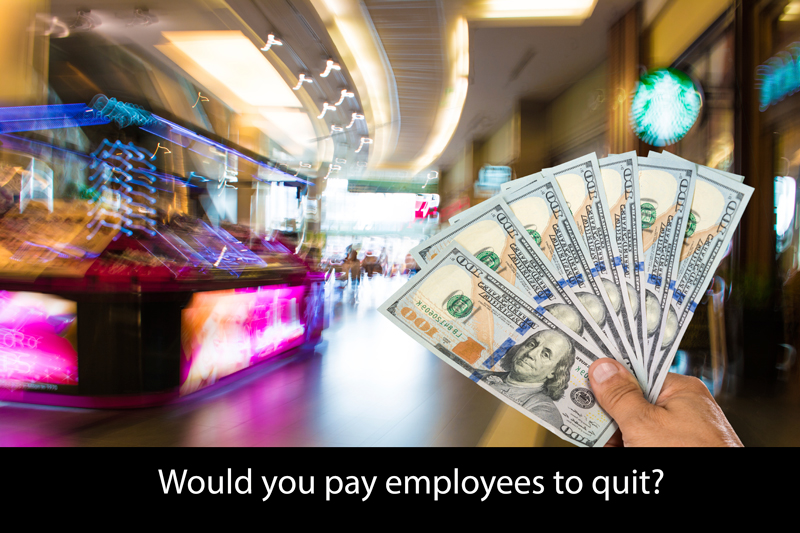 The company says their motto is “work hard, play hard” and that’s the guiding principle behind how employees are treated. Zappos has a number of core values that go along with this concept but also with their overall business objectives of providing “wow” customer service, embracing and driving change, being passionate and determined, and pursuing growth and learning, among others. To really ensure employees understand these concepts, they’re trained on each of them individually during the onboarding process, and there’s a big focus on consistency when it comes to training on those core values.

Zappos takes their corporate culture incredibly seriously, and that’s demonstrated in their hiring process—it can reportedly be months between the time an employee takes an initial “cultural fit” interview and when they’re presented with a hiring offer. Cultural fit is the first and foremost priority of the company, and if a candidate isn’t able to pass that hurdle, they’re not invited to continue on in the interview process.

The cultural fit interview process is guided by six carefully crafted behavioral-based questions, and if you pass that part of the process and you’re hired, you’re then sent to the Zappos call center so you’re able to really understand the customers’ concerns.

This is where it gets really interesting.

Download the free whitepaper: Developing Talent and Tapping Into Potential Through Corporate Mentoring

Once you’ve passed your time in the call center, you’ll be offered a sum of money, reportedly $3,000 to quit.

It may seem crazy, but ultimately Zappos wants those diehard, dedicated, engaged and enthusiastic employees and if you’re willing to take the money and run, they feel chances are you probably wouldn’t have had the right qualities for their company anyway.

Some people have pointed out the high cost of paying people to quit, but to Zappos it ultimately saves them money in the long-term—they’re going to have a more productive workforce who’s bringing them value and they can weed out the others before they become a drag on the entire company.

It’s such an interesting concept that another mega-company, Amazon, has also enacted a similar policy.

Just this year, the company’s CEO wrote a letter to shareholders in which he explained the implementation of a Pay to Quit program.

The concept is similar, but there are some differences from Zappos. Namely, employees are offered the option once a year to quit—the first year they receive the offer it’s for $2,000 and the amount increases by $1,000 each year the employee is there. The maximum amount an employee can receive as part of the Pay to Quit program is $5,000.

Jeff Bezos, the company CEO, explained to shareholders that unhappy employees are damaging to a company, and it’s not good for anyone involved to stay where one doesn’t want to be.

Amazon hopes the program not only helps them ensure their employees truly want to be there, but that they feel more connected to the organization as a whole because they’re willing to forego a pretty hefty sum of money to remain part of it.

The concepts are interesting—it’s not something that’s really been done up until this point, but both Zappos and Amazon seem to find real value in what they’re offering.

What do you think about paying employees to quit as part of your talent management strategy? Is it something that’s feasible or realistic for smaller companies, or just a ploy that can end up costing you great talent?

What Makes a Genius and How Can You Hire Them?

Is Your Company a Deliberately Developmental Organization?

Striking a Pose: Is There Anything to it?